Changeling is the first release by Steamberry Studio. It’s available to purchase on Steam and itch.io for $19.99USD.

Summary:  Unlike her twin brother Spencer, Nora is happy to be moving back where they grew up. She can see her best friend Ally again and start over at school. But as the past comes sneaking back, Nora learns that the supernatural world actually exists, Vampires, Werewolves, Faeries and all. Oh and her best friend is a Witch. With the help of Ally and her new group of friends, Nora searches for answers about her own origin and what exactly happened to her and Spencer five years ago.

Note: Though I am a kickstarter backer with early access and the official guide, I was offered pre-early access in exchange for an early review. Unfortunately, I wasn’t able to make it in time to be a pre-release review. A very special thanks to Steamberry Studio for reaching out to me and being so understanding and patient with my delays.

END_OF_DOCUMENT_TOKEN_TO_BE_REPLACED

Pinewood Island is an otome/mystery game by Jaime Scribbles Games. It’s available on Itch.io and Steam for $9.99USD. Their upcoming project As We Know It was successfully funded on Kickstarter!

Summary:  The MC joins a science class that spends a month studying on a secluded island. Though everything seems to be going fine, it’s not long before someone is murdered. Can the MC find the murderer while keeping everyone alive? Or will love make her the next victim…

END_OF_DOCUMENT_TOKEN_TO_BE_REPLACED 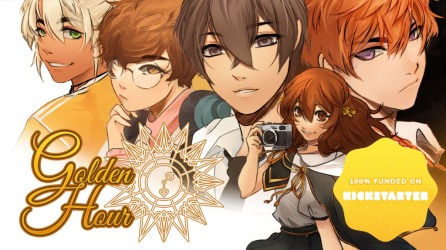 Golden Hour is an upcoming free mobile game by Matchaa Studio. Download the demo at Google Play or the App Store.

Special thanks to Matchaa Studio for reaching out to me about their demo!

Synopsis:  Just days before the deadline of a photo essay competition, the MC (first name changeable) has to drop her topic and transfer to a new city. Her new school is bustling with activity, and she quickly learns that a new essay topic is as close as the people around her. But everyone has their own agendas and secrets, and the camera can’t capture it all. Can the MC make it through to the school festival, or will rivals and romance cloud her lens?

END_OF_DOCUMENT_TOKEN_TO_BE_REPLACED

Love Ritual is an upcoming game for PC/Mac by ZandArts. The demo is available on Itch.io.

Special thanks to XandArts for reaching out to me about the demo!

Synopsis:  Because of her expertise in the occult, Riilai is tasked with investigating the recent performance of a forbidden ritual. It was either the druids or the necromancers, but both sides claim they didn’t do it. Riilai must solve the case and determine who is lying, but two attractive representatives may make her job more difficult than she anticipated!

END_OF_DOCUMENT_TOKEN_TO_BE_REPLACED Pipe Dream is an upcoming otome game by Notome Games!  The demo is available on itch.io.  Kickstarter coming soon!

Special thanks to Notome Games for reaching out to me about their demo!

Synopsis:  Robin is ready for her first taste of freedom, and there’s no better place than college to find that fresh start. New friends are around every corner, but they come with their own secrets. Help Robin navigate the campus and her heart to find her own happy ending.

END_OF_DOCUMENT_TOKEN_TO_BE_REPLACED

The walkthrough available on the Sakevisual forums (this link no longer exists, but here is a walkthrough on Steam) has a lot of useful tips and also the correct answers for each character, so this is just some things to keep in mind along with the walkthrough.

The game is now also available on Steam and mobile devices!